December 13: Big Picture: Same Financial Recipe as August 2015?
Last Weekly Research: Resuming January 10 2016.
​
On August 16, I mentioned in my Weekly Research ​( Big Picture: Emerging Concerns ) that Apple Shares
were under some Emerrging Markets Concerns and the financial riks associated to it. I am just wondering ​with the last move by the  People's Bank of China's mentioned on its website that it is more desirable to refer to both the bilateral RMB-USD exchange rate and exchange rate based on a basket of currencies, IF we can have the same financial turmoil recipe as last August...
​
The China repeg of the Yuan story hit badly the stock market and Apple Shares last Friday . In fact, it is not a China story, it is a Foreign Emerging Currency Story. Over 36% of Apple revenues comes from China and rest of Pacific Region which have seen the biggest growth in Q3 2015 results on a year-over-year basis ( +112% for China and +26% for Rest of Pacific ): Apple Q3 2015 Unaudited Summary Data. And even more if we include other Emerging Markets...

My Proxy for me is the CEW ETF ( ​​WisdomTree Emerging Currency Strategy Fund ) which is down 10.2% from a year ago as shown by the chart below. Also keeping an eye on the EEM ETF ( iShares MSCI Emerging Markets ETF - Blue Line Chart Below ).
​That will keep pressure on Apple in terms of growth ( price increases vs market share vs competition ).

I do not want to look too bearish here, but CEW is at crossroads: This will be the make or break week. Either a consolidation from a dead cat bounce or a total meltdown as we are at the Weekly Major Support Trendline from a falling wedge that started back in May 2010.​​ Just in time for the FED to consider that for its meeting... ( Bottom Red Trendline - Chart Below )
​

What I am telling you is that Relative Volatility is still on the very cheap side considering the factors above that can bring Volatility in Apple Shares til the end of the month...

​​​Stay tuned as I will update you in the Daily as usual for specific trading levels on Apple Shares...

​​SInce July 21 ( post Earnings Release ), we started to trade within a Large Wedge. On December 9, Apple Shares closed ​below the Support Trendline of that wedge, a bad omen technically speaking... ( See chart below - Top Panel - Bottom Grey Trendline )

​​Apple Shares are testing another support trendline that started back on October 1 which is $113.14 for December 14.
( See Chart Below - Red Trendline ).​

IF we break that support trendline, the risk is retesting the $107.30 to $109.50 zone before resuming uptrend.

That underperformance of AAPL since July 21 is quite obvious looking at the chart below which is the Ratio of Apple Shares over the mighty SP500 Index (Are Line). Observe that we are below the 200 DMA (Day Moving Average) on a Relative Performance basis. ( Green Line - Chart Below )

We are witihin a huge wedge pattern on a Relative Basis that started back on July 20 2015.

We are at crossroads on a Relative Basis ( AAPL vs SP500 ) as we tesed last week near the Resistance Trendline and was rejected.  ( Top Red Trendline​​​ - Ellipse Chart Below )
​​
​​It is crucial that we stay above that Support Trendline level for technical strenght...
RATIO AAPL​ Stock over SPX ( Area Line )
200 DMA ( Green Line )​
SP500 Index ( Candles )
The Big Picture for Apple Shares.

We tested again the $119.75 last week and failed to stay above that level on a weekly basis ( which is the old weekly resistance level back from November 24 2014 - chart below - Red Trendline )​​ to stay to a Macro bull behavior trend.

Also take note that the Weekly Support Trendline from an upward Channel that started back on September 28 week 2015 is at $116.62 and was broken last week.

We need to get above on a weekly basis the $119.75 level ( which is the previous weeekly break out back on the January 26 2015 week )​​ to change that Macro Bear Behavior trend. ( See chart below - Top Red Trendline )​
CEW ETF ( WisdomTree Emerging Currency Strategy Fund )
Weekly Candles​
EEM ETF ( iShares MSCI Emerging Markets )
Weekly Blue Line​ 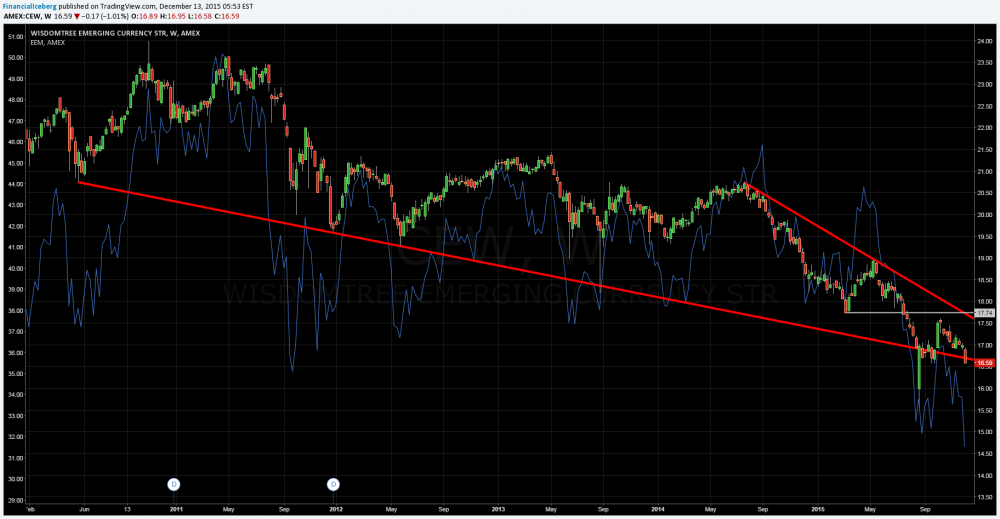 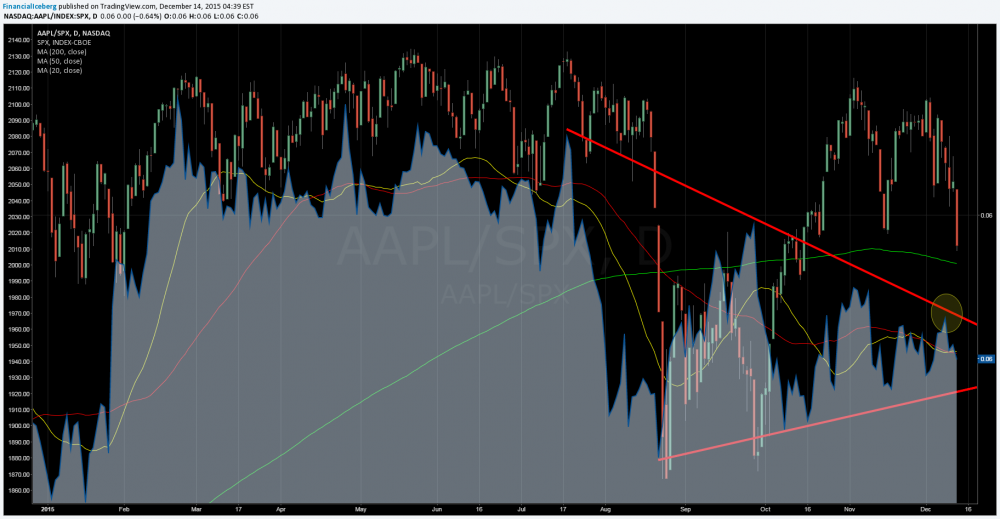