​
​In these uncertain times, it is interesting to look the behavior of ​the ​Chinese Yuan ( Yuan Renminbi / USD-
​Candles ) ​in relation to the ​Mighty SP500  and Apple Shares  ( bar chart ) ​on the ​chart below.

The China repeg of the Yuan story hit badly the stock market and Apple Shares last week again for the third time since August 2015 . In fact, it is not a China story, it is a Foreign Emerging Currency Story. Over 36% of Apple revenues comes from China and rest of Pacific Region which have seen the biggest growth in Q3 2015 results on a year-over-year basis ( +112% for China and +26% for Rest of Pacific ): Apple Q3 2015 Unaudited Summary Data. And even more if we include other Emerging Markets...

My Proxy for me is the CEW ETF ( ​​WisdomTree Emerging Currency Strategy Fund ) which is down 11.6% from a year ago.
​Also keep an eye on the EEM ETF ( iShares MSCI Emerging Markets ETF ). ​That will keep pressure on Apple in terms of growth ( price increases vs market share vs competition ).

So we need the Yuan and the Emerging Currencies to stabilize for the SP500 and Apple Shares to be back in Bullish waters.​
​

This is the highest Volatility weekly level since October 27 2015...​​

What I am telling you is that Relative Volatility is still on the very cheap side considering the factors above that can bring Volatility in Apple Shares til the end of the month but Pure Volatility level quite expensive...

​​​Stay tuned as I will update you in the Daily as usual for specific trading levels on Apple Shares...

​​SInce July 21 ( post Earnings Release ), we started to trade within a Large Wedge. On December 9, Apple Shares closed ​below the Support Trendline of that wedge, a bad omen technically speaking... ( See chart below - Top Panel - Bottom Grey Trendline )

​​Apple Shares are getting near a support trendline that started back on July 21 which is $92.02 for January 11 level.
( See Chart Below - Top Panel - Thick Blue Trendline - Ellipse).​

IF we break that support trendline, the risk is retesting the $92.00 zone and make new lows before resuming uptrend.

Interesting to note that PVT ( Price Volume Trend ) is already below the August 24 2015 but near a Support Trendline also.
( See Chart Below - Bottom Panel - Thick Blue Trendline )

That underperformance of AAPL since December 11 2015  is quite obvious looking at the chart below which is the Ratio of Apple Shares over the mighty SP500 Index (Area Line). Observe that we are well below the 200 DMA (Day Moving Average) on a Relative Performance basis and in a downward channel that started back since July 20 2015. ( Green Line - Chart Below )

We are at crossroads on a Relative Basis ( AAPL vs SP500 ) as we tested last week near the the Major Support Trendline and was rejected.  ( Bottom Blue Trendline​​​ - Ellipse Chart Below )
​​
​​It is crucial that we stay above that Support Trendline level for technical strenght for Apple Shares...
RATIO AAPL​ Stock over SPX ( Candles )
200 DMA ( Green Line )​

The Big Picture for Apple Shares.

Also take note that the Weekly Resistance Trendline that started back on August 25 week 2014 is at $102.90 and was broken last week.

​​​For the weekly, we are now within a downtrend channel that started on the week of December 7 with $92.00 as support and $102.90 as resistance. See chart below.

We need to get above on a weekly basis the $102.90 level ( which is the previous weekly break out back on the October 20 2014 week )​​ to change that Macro Bear Behavior trend. ( See chart below - Bottom Blue Trendline )​
Apple Shares
Weekly Candles​
Yuan ( Yuan Renminbi / US Dollar Exchante Rate )
Weekly Blue Line​ 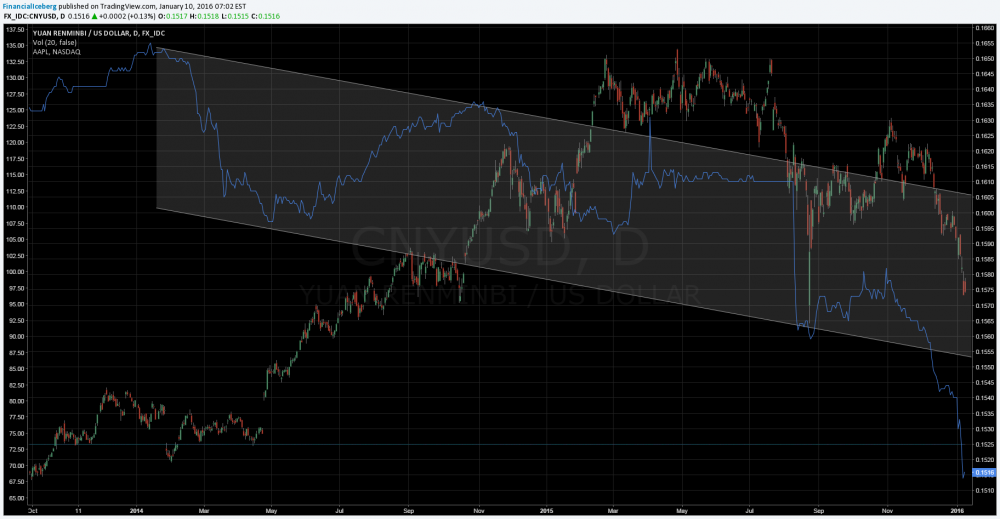