Disclaimer
​
TECHNICALS
DJ Industrials ETF (DIA):  Major Support tested?
May 09 2016  ( From TradingView, Stockcharts )
If you would like to receive our free daily markets updates, please Sign-up
The Situation

Since we made almost a double bottom technical pattern (January 20 2016
and February 11 2016) on the Dow Jones Industrial ​Average ETF DIA, we are
​into a higher highs and higher ​lows technical pattern ​in a multiple up steps...
​​(See 1rst Chart Below)
​
​​But we broke on April 25 2016 a steep rising wedge and are since then in a
tiny correction wave well into a downtrend channel.​
​​​(See 1rst Chart Below - Channel)

The DIA ETF tested the prior Break Out Line (now becomes a Major Support Trendline) that started back since the ultimate peak in price reached​ on May 20 2015. Next week is critical for DIA ETF as it need to stay above that Trendline.​ ​​(See 1rst Chart Below - Red Trendline - Ellipse)

But what puzzle me the most is that, testing that Major Support zone on that DJ Industrials ETF, the Trading Volume is quite on the low side... ​​​​(See Chart Below - Bottom Right -  Blue Area)

As we tested that Major Support Trendline, in fact Bulls need to break at all costs on a relative basis (ratio of DIA ETF over SPY ETF) the Resistance Line that started back since December 2011 as we are near from a break out as shown by the second chart below.​​ ​​​(See 2nd Chart Below - Ellipse).
​Welcome to the Relative Battlezone Challenge for Bulls. 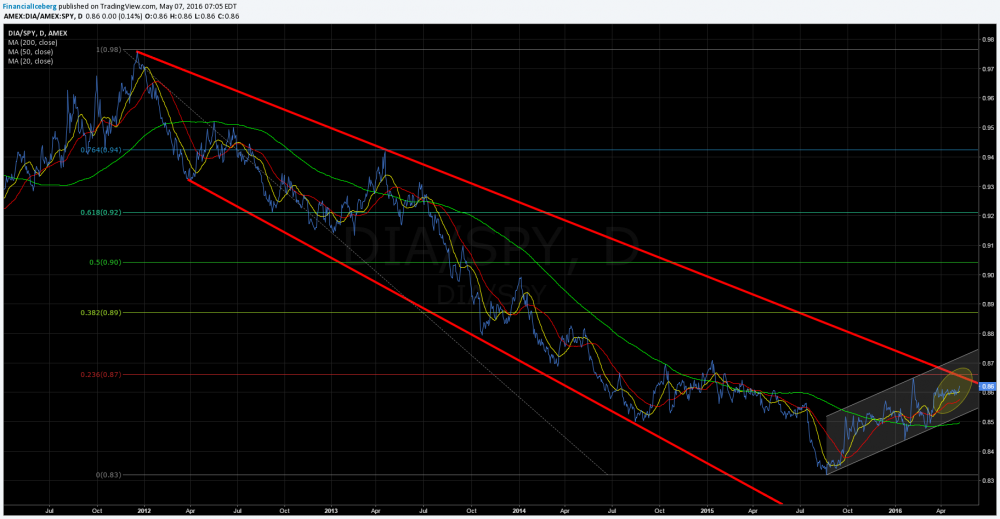