Disclaimer
​
TECHNICALS
DJ Transportation: Divergence Prevail?
June 16 2016 ( From TradingView )
If you would like to receive our free daily markets updates, please Sign-up
The Situation

​
​We just start to realize how deep the correction last summer was on the ​​​US equity market:
​On the low made on August 24 2015 on the Dow Jones ​Transportation Average ( DJT ) at ​
​7452.70, even if few realize that the DJT now trade ​just slightly above that level. ​
​(See first chart below: Amber Trendline)
​​​
The Mighty Dow Jones Transportation Average Index (DJT) is keeping the same message
as it keep underperforming other Major Indices.​

​​6) ​​Almost the same battle with the Mighty SP500 Index on a relative basis. The ratio (Dow Jones Transportation ​to the Mighty SP500 Index) tested the 200 DMA (Day Moving Average) on April 21 2016
​ ​(See third chart below - Green Line - Ellipse)​ and we are back below the previous low level reached on May 16 2016. ​​
​(See third chart below - Bottom Right Ellipse)​
​
As the ​​​​​Mighty SP500 Index got over the previous peak reached on November 3 2015, the Dow Jones Transportation ​it failed to reach yet the 8300 zone peak  in November 2015; it is still into a lower highs and lower lows technical pattern, a completely different pattern than the SP500 Index. ​​​(See First Chart - Thick Amber Trendline - Ellipse)

​​But most importantly, what puzzle me the most is that, a Big Divergence continue to prevail between Dow Jones Transportation the Dow Jones Industrials and the Mighty SP500 Index. As the keep underperforming, it become a serious warning from the Dow Theory.
​ 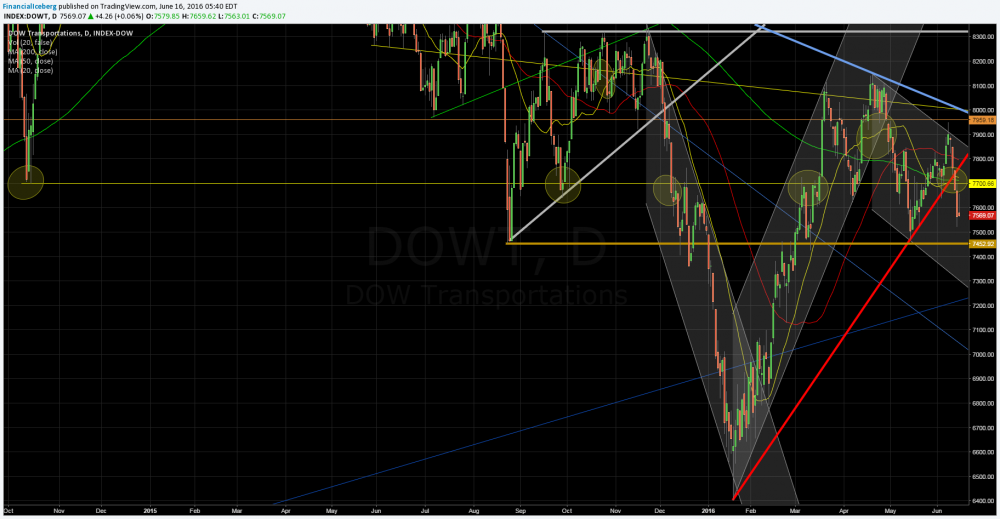