Disclaimer
​
TECHNICALS
DJ Transportation: Critical Major Resistance?
July 13 2016 ( From TradingView )
If you would like to receive our free daily markets updates, please Sign-up
The Situation

​We just start to realize how deep the correction near the end of the month
​of June was on the US Equity Market and all that a courtesy of Brexit Fears.
From the pre-Brexit close made on June 23 2016 at 7671.53 ​on the Dow Jones
Transportation (DJT)​, to post-Brexit close 2 trading sessions after on June 27
​at 7093.40, ​a drop of 7.5%, a level reached in mid-February 2016.
​​​
Rebounding from those technical levels was quite a statement ​from Mr Market
​but few of us realize that the the post-Brexit panic was in fact an opportunity
for portfolio managers to rebalance at the end of month/quarter from cash
​and bonds to stocks. Also,the relative flight to quality and liquidity was in
​strong favor of US Equities​​.
​​​
The Mighty Dow Jones Transportation Average Index (DJT) is at Technical Crossroads to say the least. Already, the SP500 Index is in Breakout mode since July 8.     ​(See First Chart Below - Ellipse)​
​
Here is some Technical Observations:​​​
​1) DJT underperformed with 3.3% below from its previous high reached on April 20 2016
​and SP500 is at 2.3%​​​​ above April 20 2016 high. (See second chart below)​
​
​​2) DJT from highest peak price (reached on November 28 2014) to the lowest price yet (reached on
​January 20 2016) was 31.2% and only 15.2% for the Mighty SP500. ​​​​(See second chart below)​

​​​4) DJ​T is at the Major Daily Resistance Trendline that started back on March 20 2015. ​​​​
​(See first chart below - Blue Trendline)
​
​As the ​​​​​Mighty SP500 Index got over the previous peak reached on May 20 2015, the Dow Jones Transportation ​failed to reach yet a new high from April 20 2016; it is still into a lower highs and lower lows technical pattern, a completely different pattern than the Mighty SP500 Index. ​​​(See Second Chart)

​​But most importantly, what puzzle me the most is that, a Big Divergence continue to prevail between Dow Jones Transportation the Dow Jones Industrials and the Mighty SP500 Index. As the keep underperforming, it become a serious warning from the Dow Theory.
​
It becomes so Critical for Bulls to fight that Ultimate battle to break that Major Resistance Trendline for the Dow Jones Transportation especially after two false breakdown at the Support Trendline.
​(See third Chart Below - Bottom Red Trendline) 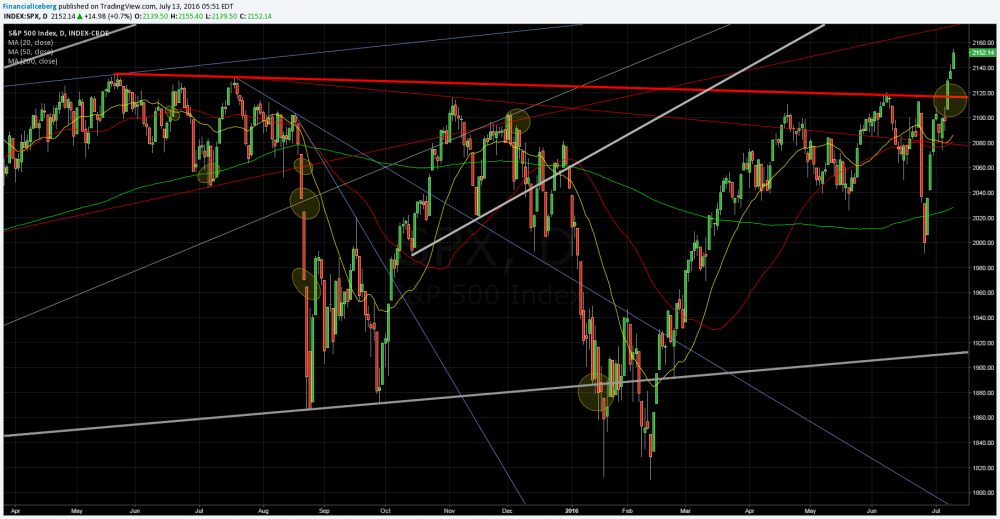