Disclaimer
​
TECHNICALS
Emerging Markets (EEM ETF): Relative Breakout?
August 18 2016 ( From TradingView )
If you would like to receive our free daily markets updates, please Sign-up
A few charts below are worth a look: the iShares Emerging Markets
​(EEM ETF in Candles - First Chart Below) compare to the iShares Core
​SP500  ​(IVV ETF in the charts below showed in Bar Chart)...

​​The Emerging Markets  (EEM ETF) started a Bullish Trend from the
​post-Brexit panic on June 27 2016 to make a Breakout on June 26 2016
​(from a Major Resistance Trendline that started back on May 20 2015
of an old Downward Channel​). (See first chart below - Channel)

​​​EEM ETF is underperforming Tremendously since October 2010 ​(on a relative basis ​- ratio of EEM ​over IVV) and is still within a huge ​​downward ​channel that started on October 2010. It reached an abysmal level in January 2016​, levels last seen on a Relative Basis was way back in September 2004.
​​ ​​(See Second chart below - Amber Trendline)

​​​​​​Also quite interesting is the behavior lately of the EEM ETF and US Dollar Index (DXY). The EEM ETF is usually outperforming when DXY is weaker and vice versa...  The Downtrend of the US Dollar Index since July 25 2016 did help tremendously the EEM cause...​(See Third chart below - Ellipse)
​
​​​And all that happening when the Emerging Market Currencies (CEW ETF) ​​broke in Mid-July 2016 a Major Resistance Trendline of the week of March 09 2016. (Grey Trendline - Fourth Chart Below  - Ellipse)

That is a typical behavior of a market trying a Major Relative Breakout. Emerging Markets ETF EEM is a must follow into the next trading sessions. A weak US Dollar can help the situation...​​ 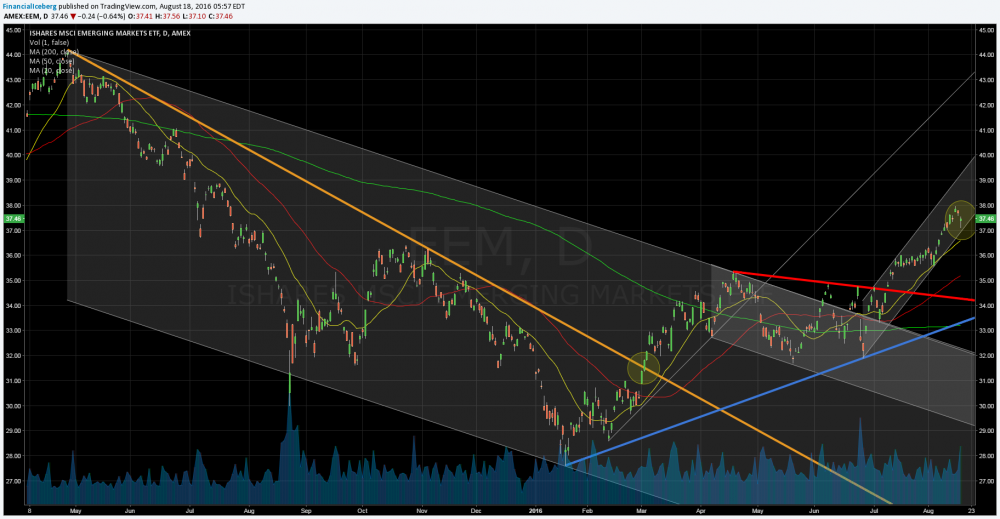