Disclaimer
​
TECHNICALS
FANGA Stocks: Mind the Gap
​June 05 2017 ​( From TradingView  )
If you would like to receive our free daily markets updates, please Sign-Up
​The FANG Stocks (FB, AMZN NFLX, GOOGL) (plus Apple so FANGA)have been
​extremely popular within the investment community​. It is belonging to that new
​technology sector a la mode and did perform quite well compare to the broad
​market indices like the SP500 Index since the US Election in November 2016.

Let s have a quick technical analysis overlook at the weekly for those five ​​​​​stocks.

​​1) Facebook (FB):
- On a Weekly basis, broke violently on the upside (April 24 2017) the Major
​Resistance Trendline from a​ Rising Wedge that started back since March 2014
​on Facebook shares. Bulls need to protect it. ​(See First Chart Below - Left - Blue Trendlines)​​
​Facebook is also within a Huge Weekly Uptrend Channel.

2) Amazon (AMZN):
- On a Weekly basis, we did break on the week of May 8 2017 the Major Resistance Trendline of a Huge Rising Channel Technical Pattern that started back since January 2014.(See Second Chart Below - Right - Grey Trendlines)​​
​Since March 27 2017, it is trading within a Weekly Uptrend Channel on lower trading volume.

3) Netflix (NFLX):
- On a Weekly Basis, Netflix shares are now getting near testing a Major Weekly Trendline from a Megaphone Pattern that started back in July 2011. ​(See Third Chart Below - Left - Top Yellow Trendline)​​
Contrary to its peers, Netflix did not yet have a Major Breakout. ​

4) Google - Alphabet ( GOOGL):
​- On a Weekly basis,​ Alphabet did have a Major Breakout from an Uptrend Channel that started back since February 2014. ​​(See Fourth Chart Below - Right - Grey Trendlines).​
​Since April 24 2017, it is trading within a SteepWeekly Uptrend Channel that Bulls need to protect at all costs.

​​5) Apple Shares (AAPL):
- On a Weekly basis, Apple Shares did a Violent Major Breakout on the Upside​ on the January 30 2017 week.
​(See Fifth Chart Below - Left - Yellow Trendline)​​
A second Breakout happened after reaching above the Weekly Resistance from a Weekly Megaphone Technical Pattern.​ ​(See Fifth Chart Below - Left - Red Trendlines)​​
Bulls need to stay above that Trendline (now becomes Support on a Weekly basis.

​​​6) SP500 Index (SPY ETF):
- On a Weekly basis, the SPY ETF is within a Huge Rising Wedge Technical Pattern that started April 18 2016 week.​(See Sixth Chart Below - Right - Grey Trendlines).​
​No recent Breakout on the SPY ETF contrary to most of the FANGA stocks.​

As investors poured a lot of money into those FANG stocks, they have been well rewarded​​ in term of performance since November 2016. The Trumpification of Financial Markets bring all of the FANGA stocks to outperform tremendously the SP500 Index since the US Election. What we must realize is that those FANGA stocks (big capitalization) with strong momentum​​ are 10.57% of the SPY ETF, 34.8% of the Nasdaq 100 ETF QQQ. Momentum ETF MTUM is 32.53% invested in Information Technology. The market is all in for those stocks

​​As shown by the last chart below, the huge difference in terms of performance since the US Election is striking between the SP500 Index and the FANGA stocks. I just want to say, Mind the Gap. 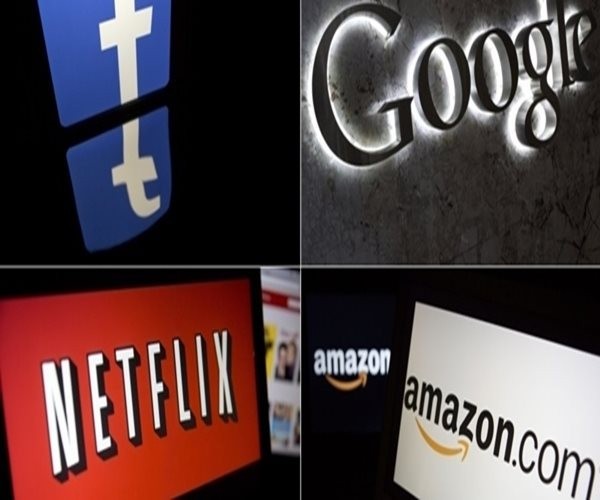 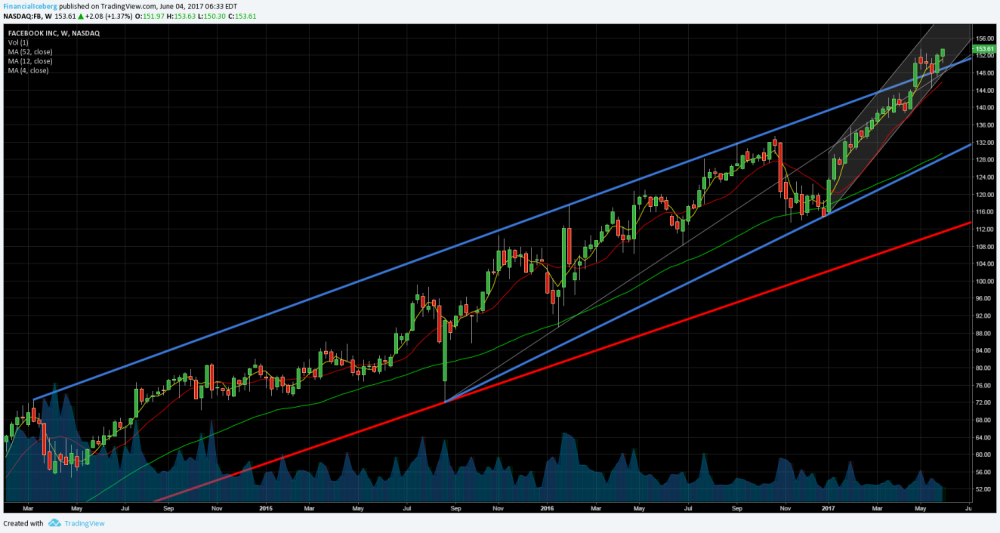 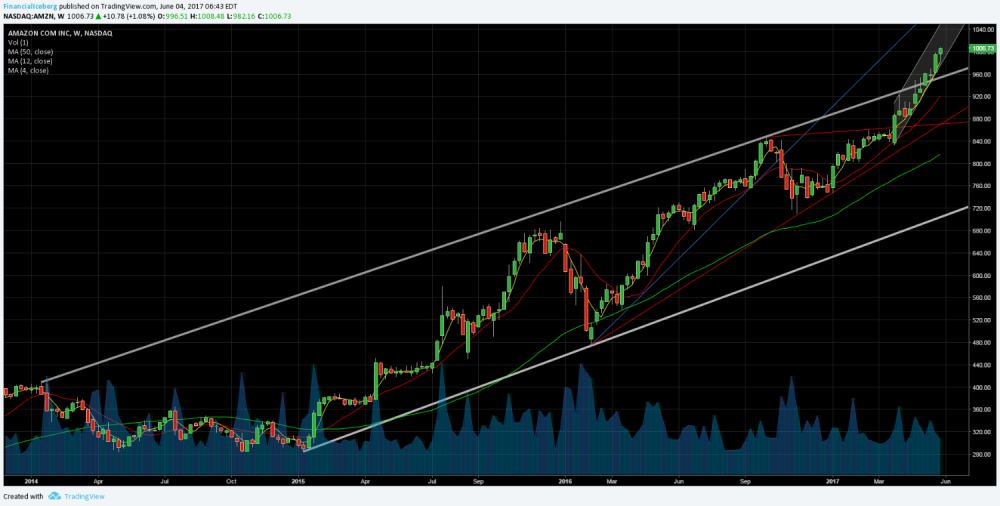 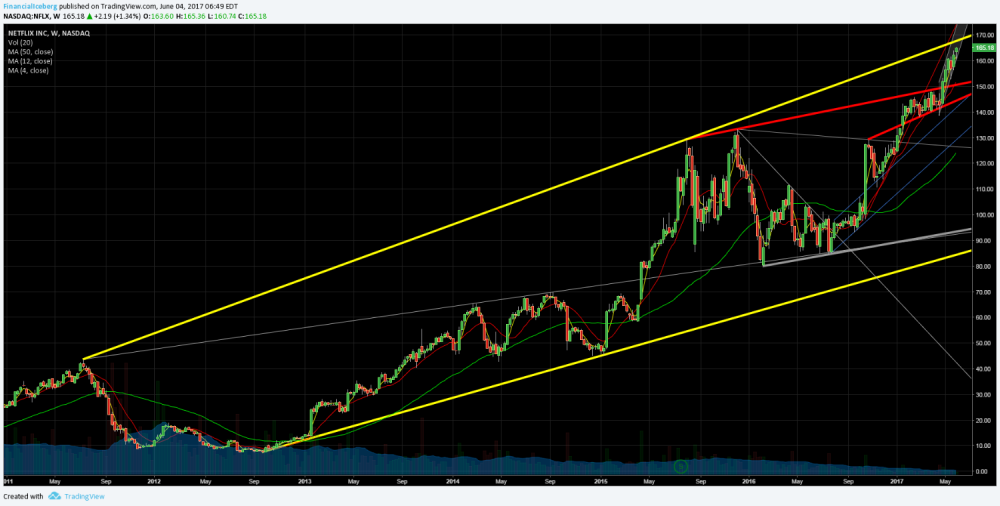 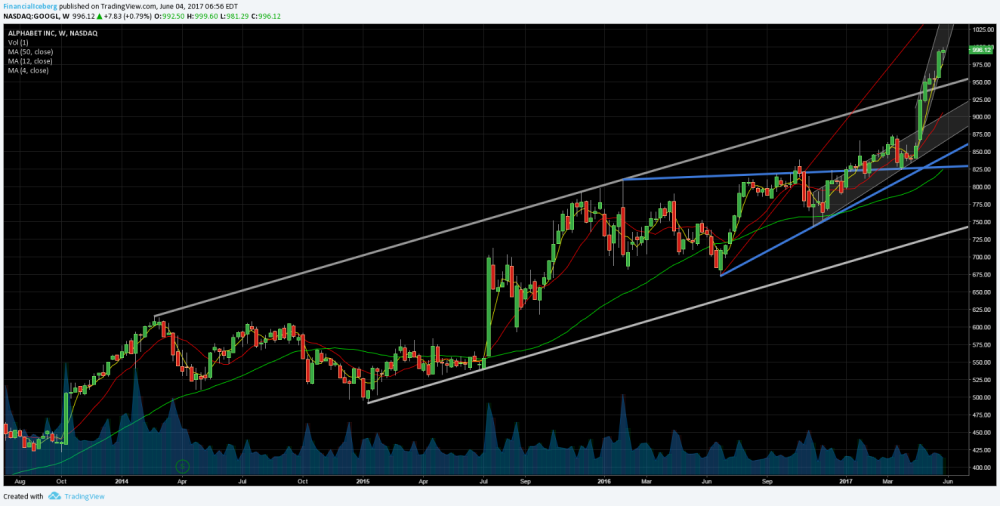 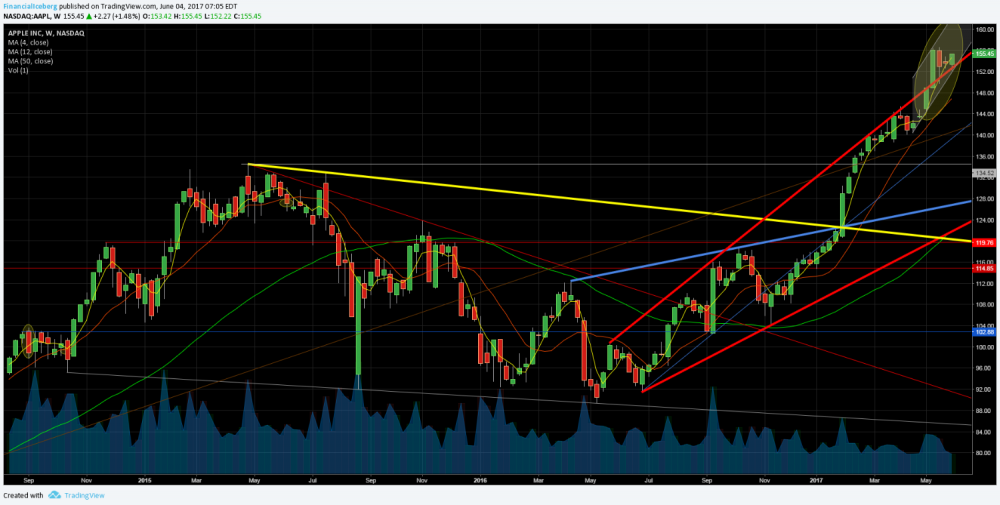 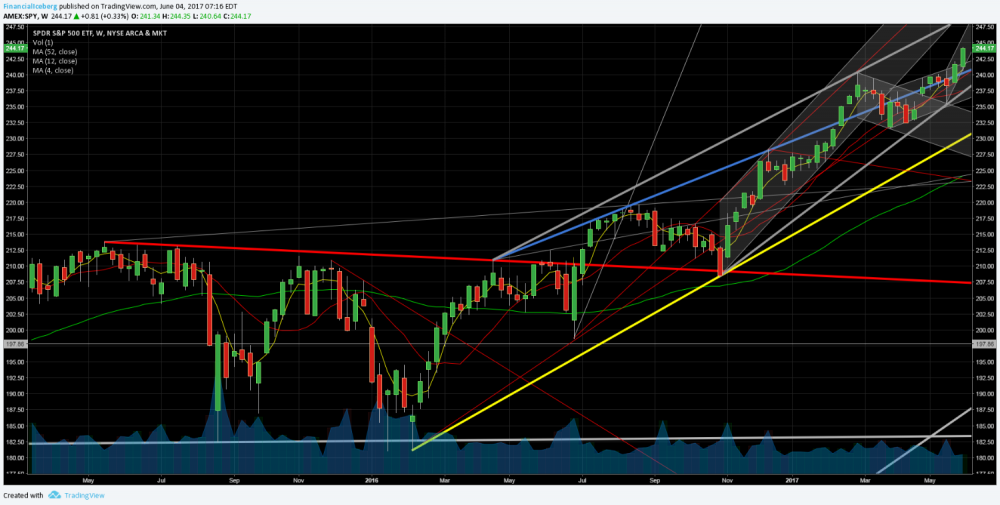 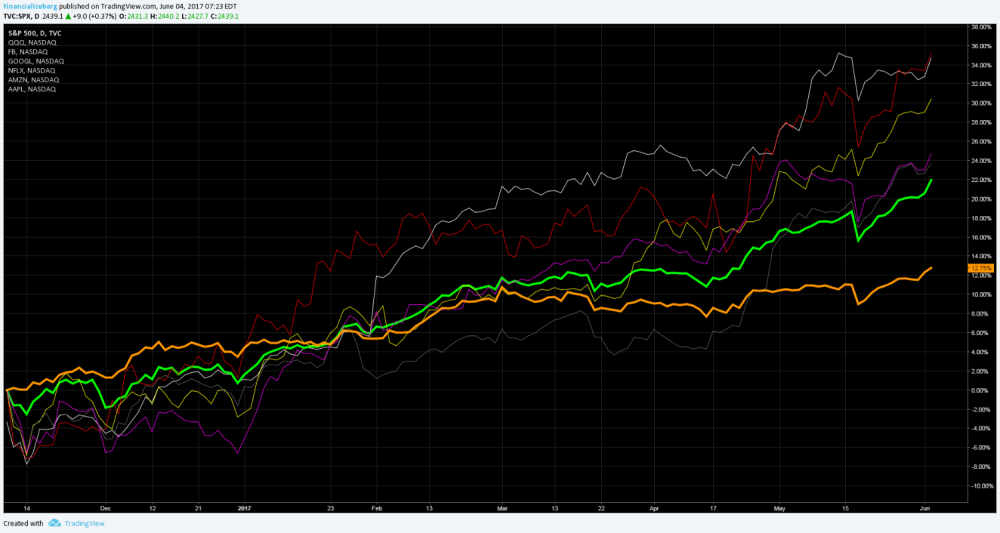