Disclaimer
​
TECHNICALS
Russell 2000 vs SP500: Testing Critical Support Trendline ?
​January 5 ( From TradingView )
If you would like to receive our free daily markets updates, please Sign-Up
​The Situation
​
​Financial assets like the SP500 had a very good performance indeed; and the small
​capitalization outperformed ​big ones a lot but starting to meet huge resistance and
​turned bearish since March 24 2014....

​​Even the main technical indicators like the Russel 2000 Index and the ​SP500 is showing
​a triple top on a ratio basis. The first top was in October 2013 and the second one in
​January 2014 and the third one in March 2014. ​​Interesting to note that this ratio reached
​new highs and occured in a stock market correction in all 3 cases as you may ​see in ​
​the chart below ( Ellipses )...

The 21 DMA ( Day Moving Average ) turned downward on  December 4
​and then gives a short term sell signal for the Russell on a relative
​basis ​compare to the SP500...​​

But the real interesting part is that since this ratio Tested the Resistance Level ( On June 25 2015 ) from a Trendline that started on February 2012 and then can gives a real wall of Resistance to the Russell on a Relative Basis to the Mighty SP500; Since then Russell underperforming tremendously the Mighty SP500.
​  ​( See chart below - Red Trendline - middle of the chart ).
​
​We are now back at the Major Critical Support Trendline that started back on February 2 2010 and on the downtrend channel support also: ​breaking that support will bring a lot more underperformance from the Russell 2k vs the Mighty SP500. ​​( See chart below - Amber Line  - Bottom of the chart ).

The market still favor the most liquid stocks over the smallest less liquid stocks; a bearish behavior​​ indeed... 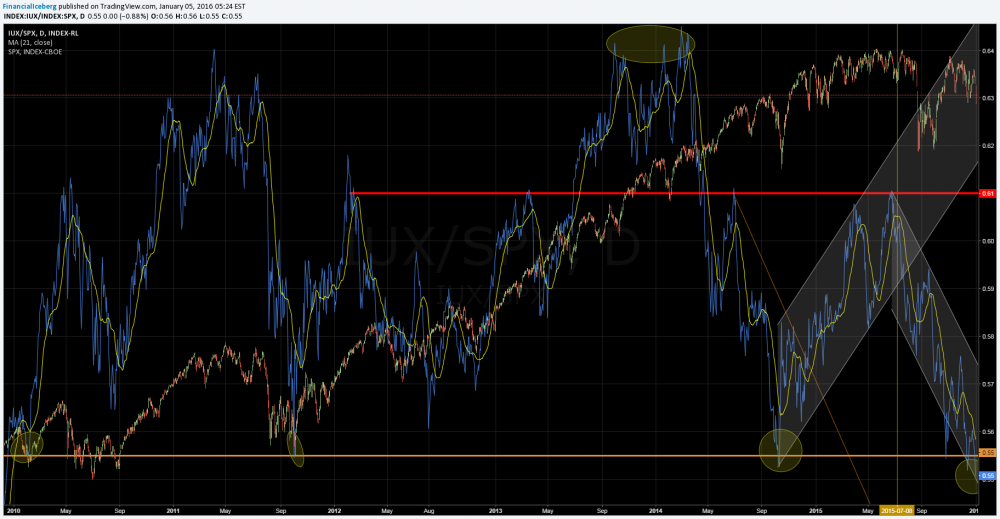