Disclaimer
​
TECHNICALS
Russell 2000: Back at the Major Resistance?
​May 17 2016 ( From TradingView )
If you would like to receive our free daily markets updates, please Sign-Up
​The Situation
​
The Russel 2000 Index is back at a Major Technical Crossroads.

​​​So the Russell 2000 outperformed tremendously lately the Mighty SP500 Index on a relative basis (ratio of Russell 2000 over SP500 Index - Blue Line - Fisrt Chart Below). Interesting to note that this ratio reached the bottom of this cycle on February 9 2016 and now testing the 50 DMA (Day Moving Average) zone ​(See first chart below - Red Line - Ellipse). but still into a downtrend channel since June 23 2015.
​
But the real interesting part is that the Russell 2000 Index price wise strong battle still to breakout the Major Resistance Trendline that started back since June 23 2015, the peak ever in that stock index. ​At the same time, the Russell 2000 is trying to get above the 200 DMA. (See second chart below - Green Line - Ellipse ).

​​This is a crucial technical zone for Bulls for a continuation of the out performance of the Russell 2000 over the SP500 Index...  (See second chart below - Red Trendline - Ellipse ).The Russell 2000 is obviously at technical crossroads. 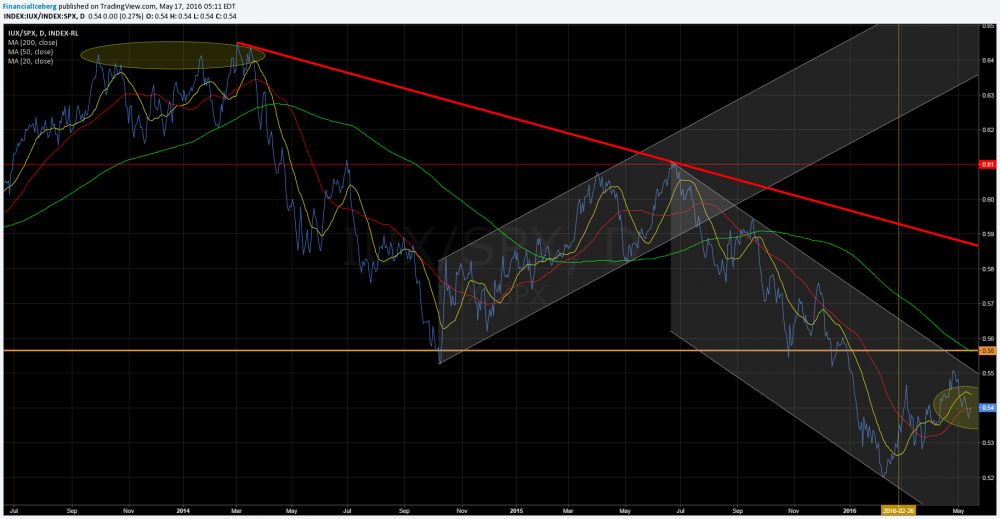