Disclaimer
​
TECHNICALS
Stocks to Bonds Ratio : Highest Ever ?
​November 17 2016  ( From Tradingview  )
If you would like to receive our free daily markets updates, please Sign-Up
Since the beginning of the financial crisis, the Federal Reserve has
​been obliged to inject tons of liquidity into the system. Financial
​assets like the SP500 had a very good performance indeed on
TINA (There Is No Alternative)​ theme. Financial markets were in
consolidation mode til the result of the US Election; ​the strong
rally in stocks​ lately has been enough in terms of valuation
​compare to interest rates.

​​Even the weekly technical valuation indicator like the Ratio of the
SP500 (IVV ETF - ​ iShares Core S&P 500 ETF) compare to the
​IEF ETF ​(iShares 7-10 Year Treasury Bond Fund ETF) are pushing
​valuation ​​again to the limit on a ratio basis as history suggest.

​​That ratio is evolving within a Huge Rising Wedge that started back
since June 2007 (which was the major previous peak at the beginning of the financial crisis).​
(See First Chart Below - Thick Grey and Red Trendlines)
​
Since cratering in March 2009, that ratio was in a grinding phase, making higher highs and higher low. That mean that stocks were in outperformance of bonds til the second wave of the crisis (which was coming from Europe) in the summer of 2011. Stocks did pretty well til June 2015 were we had a new high of that ratio, meaning that stocks were horribly expensive to bonds. Then the flash crash of August 2015 happened cleaning out the bad longs. The correction at the beginning of 2016 bring the ratio to the support trendline of the rising wedge and we did have a strong rebound thereafter. With the US Election, we reached a new high ever in that ratio.  (See First Chart Below - Red Trendline - Ellipse)

​​This is the first time that this ratio is reaching above the previous peak reached in June 2015 and at the Major Resistance Trendline (The Critical Zone); both time, the SP500 started a correction in the weeks following a strong spike as you can see on the first chart below.

As stocks battle to keep near their high ever, bonds technicals are in a poor condition. In fact, the IEF ETF
​( iShares 7-10 Year Treasury Bond Fund ETF ) broke a Major Support Trendline that started back in June 2007 as shown by the second chart below. ( Top Panel - Blue Trendline - Ellipse )

​​​​But few realize that already, if we take the corporates credit bond funds HYG ETF and JNK ETF) instead of the US Treasurys, we did already broke since July 2014 that Major Support Trendline as shown by the second chart below. ( Middle and Bottom Panel - Blue Trendline - Ellipse )

Is the Trumpification of the financial markets will make that this time is different; history will tell... 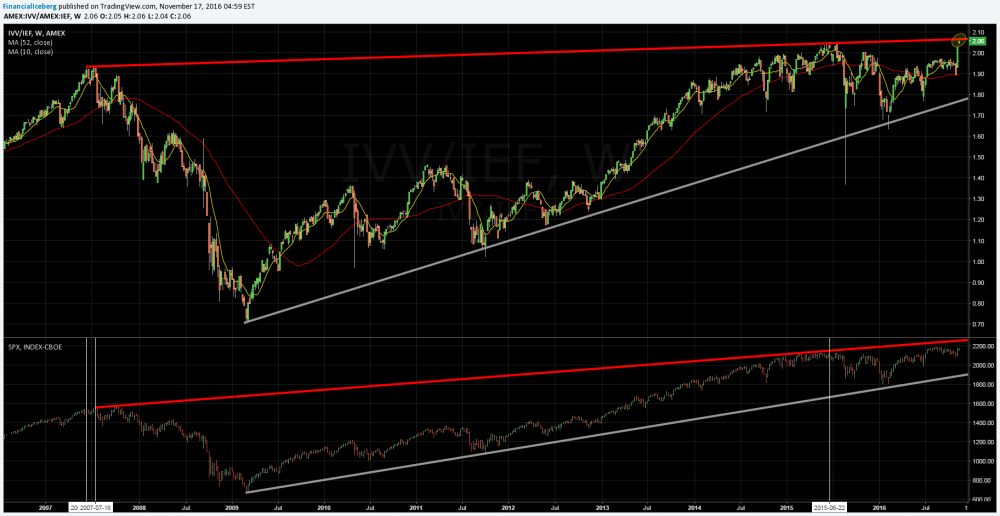