Disclaimer
​
MARKET INSIGHT
SP500 Behavior: Into the Junkyard Phase ?
February 15  ​( From FRED, McKinsey, TradingView , Fox Business, FACSET,Financial Sense, Globe and Mail, Bloomberg, AlhambraPartners, Financial Sense, BCA Research, CPB )
If you would like to receive our free daily markets updates, please Sign-Up
The Situation
​
​
We did have since the last financial crisis, multi factors helping the economy but
moslty the Financials Assets as the QE ( Quantitative Easing ) was implemented
​in ​November 2008 by the Federal Reserve.

It did inject tons of liquidity into the system, bring the interest rates lower, compressed
​corporate bond spreads​. Also it kept the US Dollar on the cheap side.

But we may be witnessing a major reversal of all those factors since mid 2014​​ and it
​may have ​tremendous unintended consequences on financial assets.

I will show you charts to prove that that we are now Into the Junkyard Phase...

​​The US Dollar has reached levels not seen since September 2003 ( see chart below - amber line ) and start to be a huge drag on Foreign Profits of US Corporations and uninended consequences on Emerging Markets Debt in US Dollar:

From FACTSET: Similar to last quarter, companies are discussing the impact of the stronger dollar.

Emerging markets hit by commodities, credit and currencies: Kemp
Debt and (not much) deleveraging

In fact, according to a McKinsey Publication, debt growth have outpaced economic growth since 2007 but more importantly that we reached total debt as percentage of GDP of 286%. We are more leverage now than we were at the 2007/2008 financial crisis.​​

One of the most unintended consequence was that US corporations did borrow tons of money by issuing corporate bonds to buyback their own shares. Goldman Sachs: Stock Buybacks to Rescue the Stock Market

​So one of the most releveraging process from US corporations since the financial crisis have been to sell bonds to buy back their own shares.​​ And it is getting into non sense as Spending on Buybacks Exceeds Free Cash Flow for first time since October 2009 for SP500 corporations according to FACTSET.

​​But we will see that it will start to slow tremendously as corporate spreads in the US have widened tremendously and bring effective yield to a more expensive leveraging process to do those buybacks as shown by the chart below.

From Financial Sense: Credit Markets Continue to Show Signs of Stress - Caution Warranted
"Deterioration in the credit markets increases the probability of lower prices ahead with a cautious stance toward equities warranted as financial stress remains elevated."


Very few realize that we are into a post QE ( ​​quantitative easing ) phase which in fact is retrieving liquidity into the world financial system as shown in the chart below by the Fed St-Louis adjusted monetary base growth ( year over year basis in %).

​​ Forget the Sept. '15 Fed Tightening – There Has Been a Stealth Tightening Since Sept. '14

​​Not only the Federal Reserve ending QE​​ have started the Reverse QE trend, but the timing of it is scary as world economy is slowing as shown by the chart below which shows the year over year growth in world merchandise trade from CPB.

And all that stealth tightening process in the USA happening when China economy slowing down and then bring a deceleration of its monetary agregates. By broadening our Monetary Agregates by including the China Central Bank Reserves excluding Gold and
​Total US Treasury Bonds Securities held by the Federal Reserve all of them compare to the Mighty SP500 on a year over year basis in %, it becomes more obvious... ​( See Chart Below )


​​So for me, things are obvious:
​1) Liquidity is drying up quickly on a world basis not only in the US - a kind of Reverse QE started back since mid 2014
​2) US Dollar strenght will be a drag on growth and mostly earnings for US corporations
3)​ The system ( economy and companies ) are more leverage now than in 2007, so we become more sensitive for interest rate move
4) ​So the first factor is that Buybacks having less and less impact on the overall maket trend. In fact, Corporations that Buybacks their shares started to underperform the whole market since April 2015.
​
​​​​We are in the process of a deleveraging phase. Unless Central Banks add to the existing liquidity tremendously, I fear that Financials Assets who did quite good when QE was implemented suffer in terms of performance going forward.
​
And finally, market participants will start to realize sooner than later that a new valuation process is needed for the SP500 and we need to lower our expectations accordingly...​​

​​And very few of us also realize how much leverage corporations have been doing since the last financial crisis by taking more debt to buy back their own shares...

Financialiceberg.Com
And one of the crucial factor that the St. Louis Fed Financial Stress Index does not take into account is the strenght of the US Dollar and its unintended consequences. 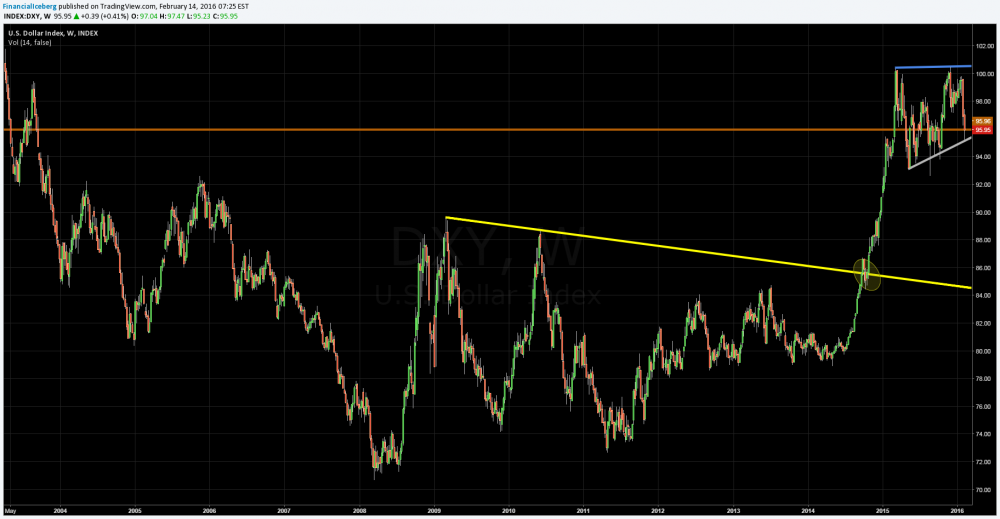