Disclaimer
​
MARKET INSIGHT
SP500 Index Behavior: A Monetary Aggregate?
May 23 2016  ​( From ​ FRED, SafeHaven, Federal Reserve Bank of St-Louis )
If you would like to receive our free daily markets updates, please Sign-Up
The Situation
​
​
The sharp rise in the US monetary base since 2008 has coincided
​with the quantitative easing (QE) programs of first QE1 then QE2 and...

On top of that, we had the buildup of excess reserves of US Banks
​because​ of the slower economy. And generally, in times​​ of crisis,
​people tend to hold more currency in their accounts...

All those factors made the Growth in the ​​St.-Louis Monetary Base
​tremendous since the financial crisis in 2007.

But the most surprising, is the fact that the financial assets, like the
​SP500 Index behave since then depending on the growth of the
​monetary base.

​​The monetary base in monetary economics is defined and measured as the sum of currency in circulation outside a nation’s central bank and its Treasury, plus deposits held by deposit-taking financial institutions (hereafter referred to generically as “banks”) at the central bank.

​​​More generally, the monetary base consists of whatever government liabilities are used by the public to purchase and sell goods and services, plus those assets used by banks to settle inter-bank transactions. During certain specific historical periods when they were in circulation, measures of the monetary base also have included commodity monies such as gold and silver coin and bullion.

​​The components—currency and deposits at the central bank held by banks—often are referred to as base money.


SP500 Index and the Monetary Base

Few words needs to explain the new relationship since the last financial crisis between the SP500​​ Index and the Monetary Base Growth as seen in the charts below.

The fisrt chart is the ​​St-Louis Monetary Base (Billions$) compare with the SP500 Index...

Quite surprising to see the same kind of pattern, except in mid-2011 when we had another European Crisis where the SP500 made ​a correction...​​

I was really surprise to see that the growth have been the same especially since the beginning of 2013 followed by a plateau since mid 2014.


May be then we should consider the SP500 as simply a new Monetary Aggregate!​​​​


Short term Correlation Between SP500 And the Monetary Base?

To complete this study, we took the ​​same data on a Monthly basis but on a correlation view:
​SP500 Index still with the Monetary base since June 2009. Quite a close relationship indeed!


​As you may observe in the charts above, we see more than trendiness between​​ those series with obvious correlation between SP500 price action and the St-Louis Monetary Base.

And finally, market participants will start to realize sooner than later that a new valuation process is needed for the SP500 and we need in fact to finally consider the stock market as simply as another monetary aggregate...​​ 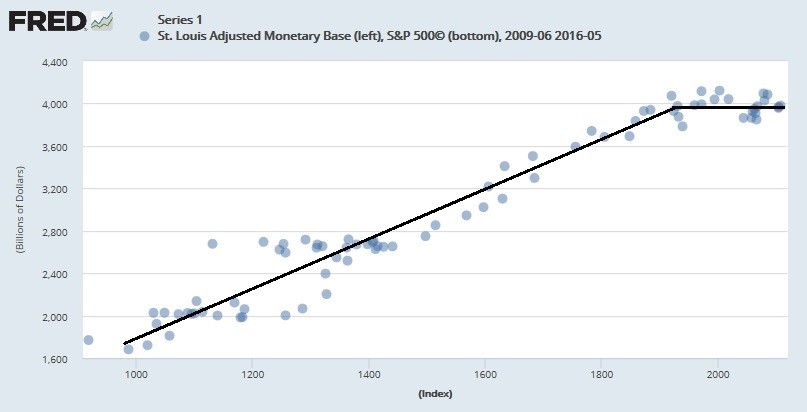