Disclaimer
​
TECHNICALS
SPY ETF/AAPL PVT:  A Tale of Two Worlds?
​May 13 2016 ( From Stockcharts , Columbus Dispatch, Barchart, TradingView  )
If you would like to receive our free daily markets updates, please Sign-Up
The Situation
​
​​​We observed that the Price Volume Trend of the SP500 tend to ​turn
​earlier ​and or confirm the trend of the Mighty SP500 (SPY ETF) as you
​may see ​in the chart below... The same idea for Apple Shares (AAPL).
​
​​Since bottoming out on January 27 2016, Apple PVT have been into
a painful grind in a narrow uptrend channel and then on April 18 2016,
​it did broke the support trendline of that channel, a bad technical sign.
​​ ​(See Second Chart Below - Bottom Panel - Blue Line - Channel)​

SPY ETF PVT made a low in this cycle only on February 11 2016, quite
later than Apple shares but still into an uptrend channel​... ​ ​
​(See First Chart Below - Bottom Panel - Blue Line)​

And early at the party compare to the SPY ETF, Apple Shares also broke a Major Support Trendline price wise on May 12 2016 that started back since August 24 2015.​​
​(See Second Chart Below - Top Panel - Amber TrendLine - Ellipse)

And few of us realize that in fact, Apple Shares are under performing the SPY ETF on a relative basis (ratio of AAPL vs SPY ETF) since April 14 2016 when it reached the resistance trendline of a downtrend channel and broke soon thereafter the major support trendline that started back since June 28 2013!
​(See Third Chart Below - Red TrendLine - Ellipse)

A Weekly Support Trendline is becoming the last call for Bulls on Apple Shares (trendline that started back since October 2014) but already a lot of technical damage have been done...​​
​​​(See Fourth Chart Below - Red TrendLine - Ellipse)

1.Rising PVT means new money, sometimes referred to as "smart money, " is flowing into the marketplace. The result will be that the present trend will continue. Accelerating PVT rise indicates that "the masses" are joining the new price trend.
2.If the PVT then levels off, it is often an early warning that the trend is finishing.
3.Declining PVT indicates that the smart money is liquidating.
4.If the PVT moves sideways or falls while the price is rising, the increase in price is not confirmed and a market top or bottom may be indicated.
SP500 Index ( SPY ETF - Top Panel - Daily Candles )
​​20 DMA ( Yellow Line )
50 DMA ( Red Line )​​
​200 DMA ( Green Line )​ 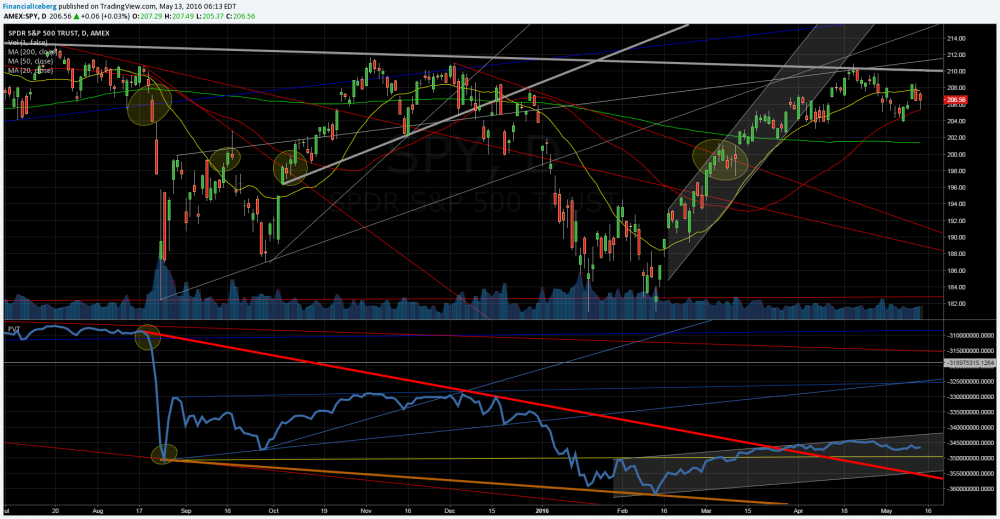 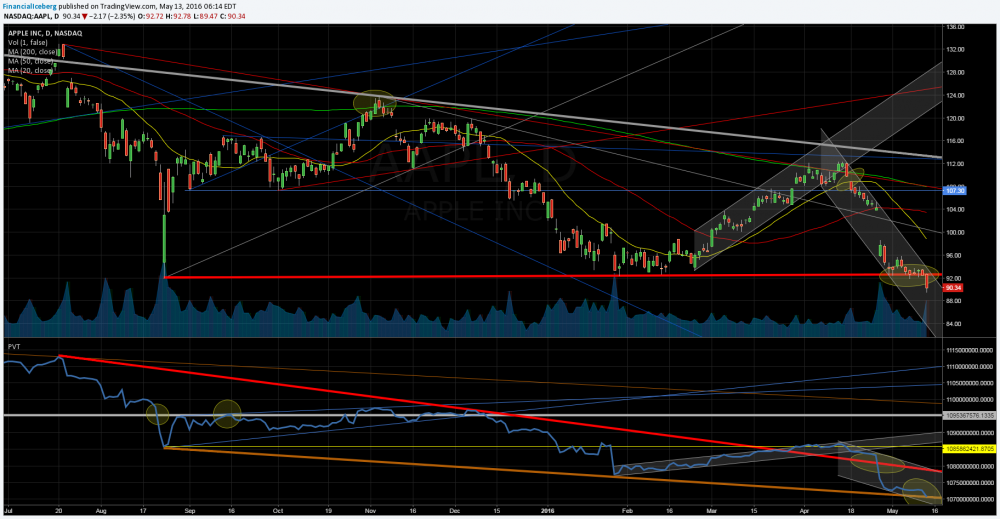