Disclaimer
​
TECHNICALS
SPY ETF/Apple Shares:  A Tale of Two Worlds?
​November 16  2016 ( From TradingView )
If you would like to receive our free daily markets updates, please Sign-Up
Starting November 9, we saw the Trumpification of Financial Markets
​as pro-growth and ​reflation theme within a protectionism bias repriced
​violently all SP500 Index ​(SPY ETF) ​and ​Apple Shares​ (AAPL).

​​In the case​ SPY ETF, we tested on October 31 week the Previous
​Weekly Breakout Trendline that started back since May 18 2015 week
​and rebounded sharply after Trump victory (pro-growth theme)
​ ​(See First Chart Below - Top Panel - Thick Red TrendLine)​

Since then, the SPY ETF is making on a weekly basis higher highs and
​higer lows. ​(See First Chart Below)​ The On-Balance Volume ​Technical
​Indicator (OBV) on SPY ETF is showing some strenght and back above
the breakout line.​  (See First Chart Below - Bottom Panel)​​
​
​​In the case of Apple Shares, ​we already broke the Weekly Rising
Channel and tested the Previous Breakout Trendline that​ started back
​since July 20 2015 and so Critical for Bulls.
​​(See Second Chart Below - Top Panel Thick Yellow Trendline - Ellipse)​
The On-Balance Volume Technical Indicator (OBV) on Apple Shares
is showing a turnaround since peaking out in October 10 2016 week
​and much weaker​ than the SPY ETF... (See​ Second Chart Below - Bottom Panel - Yellow Trendline)
​
​​​And few of us realize that in fact, Apple Shares started under performing ​the SPY ETF on a relative basis (ratio of AAPL vs ​SPY ETF ​- Weekly Chart) since October 17 2016 week (so way before the US Election) after testing and rejecting the Previous Major Breakdown Trendline (now resistance). (See Third Chart Below - Ellipse)
​
And also ​we can observe that Apple Shares are under performing ​the Technology Sector on a relative basis (ratio of AAPL vs XLK ETF ​- Weekly Chart) since October 17 2016 week and also back into a weekly Megaphone channel that started back since May 9 2016 (false breakout). ​(See Fourth Chart Below - Thin Yellow Lines)
​We broke also the Weekly Uptrend Channel.  (See Fourth Chart Below - Uptrend Channel)

​
​​In Summary: As the SPY ETF is Bullish Mode since the US Election, Apple Shares were already in a Correction Phase prior to that. Apple Shares are now at a technical crossroads as we are:
1) Still above the 52 Weeks Moving Average in price ​ (See Second Chart Below- Green Line)
2)​ Still above the 200 DMA (Day Moving Average).
3) Still above the ​Major Weekly Support Trendline price wise that started back since July 2015
​(See Second Chart Below - Yellow Trendline - Ellipse)
​4) Seasonals over the past 10 years have been Bullish on Apple Shares from November 16 to peak on December 2 on average. On a relative basis with the SPY ETF, Apple Shares started to outperform on November 16 to peak on average over the past 10 years on November 28.
​
​
The Ultimate battle for Bulls is now or never in the case of Apple Share as we are within a Dephasing Technical Pattern (vs SP500 Index) as shown by the OBV Indicator and seasonals.

​​As few of us realize, we are near testing the Monthly Support Trendline from an Uptrend Channel on Apple Shares (See Fifth Chart Below - Green Line - Ellipse) and the 38.2% Fibonacci Retracement at $106.68 ish...
​​​
"To fight and conquer in all your battles is not supreme excellence; supreme excellence consists in breaking the enemy's resistance without fighting."
​
-Sun Tzu, the Art of War 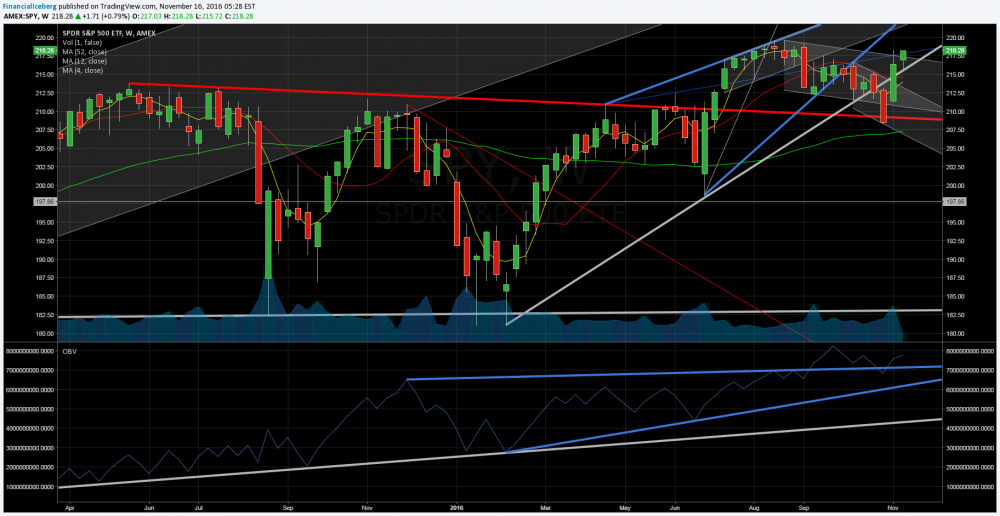