Disclaimer
​
TECHNICALS
SPY ETF/Apple Shares:  Still a Tale of Two Wedges?
​June 22 2016 ( From TradingView, CNN Money  )
If you would like to receive our free daily markets updates, please Sign-Up
The Situation
​
​​​​The market participants never gave attention to that two Wedges technical
​pattern on a weekly basis on SP500 Index (SPY ETF) and Apple Shares​.
​
​​In the case SPY ETF, we are within a Weekly Rising Wedge that
started back since August 18 2015.​
​(See First Chart Below - Thick Red TrendLines)​

And few of us realize that in fact, Apple Shares are under performing
​tremendously the SPY ETF on a relative basis (ratio of AAPL vs SPY ETF - Daily Chart) since April 14 2016 when it reached the resistance trendline of a downtrend channel and broke soon thereafter the major support trendline that started back since June 28 2013! ​(See Third Chart Below - Red TrendLine - Ellipse) The Buffet move since May 12 was only a dead cat bounce.

Could Apple Shares continue tu underperform because of the Russell rebalancing:​​
Apple to lose weighting in Russell index, shares could fall 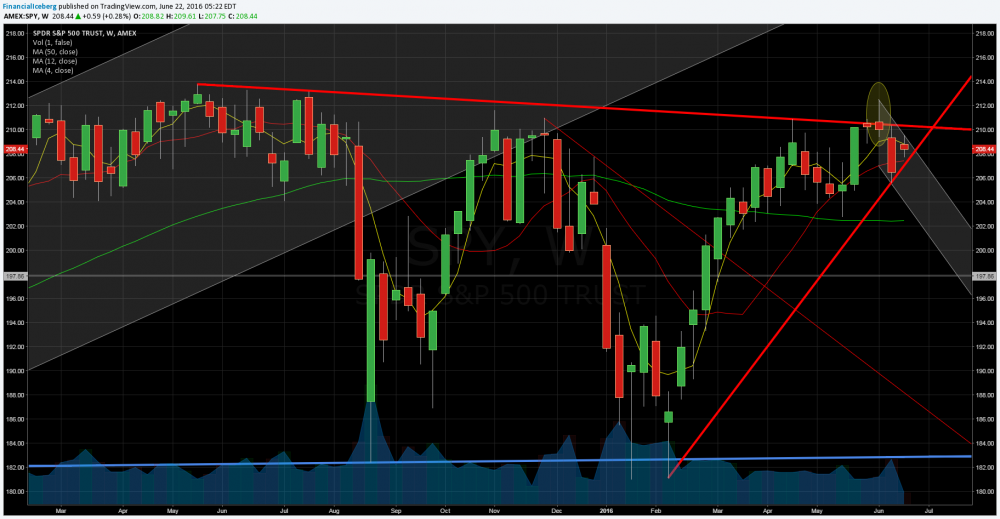