Disclaimer
​
TECHNICALS
SPY ETF/Apple Shares:  Good Earnings but Not Good Enough?
​July 27 2016 ( From TradingView, CNN Money  )
If you would like to receive our free daily markets updates, please Sign-Up
The Situation
​
​​​The market participants never gave attention to that two ​Wedges
​technical pattern on a weekly basis on SP500 Index ​(SPY ETF)
​and Apple Shares​.

​​In the case​ SPY ETF, we were within a Weekly Rising Wedge that
started back since August 18 2015.​ It was broken on the upside
​on July 4 week. ​(See First Chart Below - Thick Red TrendLine - Ellipse)​

The SPY ETF is making on a weekly basis higher lows and higher
highs. ​(See First Chart Below)​

​​In the case of Apple Shares, ​we are still within a Weekly Falling Wedge
​that​ started back since October 13 2014 as, at time of writing this
​morning in the pre-opening market at the $102.47 level.​
​​(See Second Chart Below - Thick Red Trendlines)​
​
Apple Earnings were above Expectations
​(​Apple Reports Third Quarter Results) but the question is:
​Are those Good Earnings Good Enough for a Weekly Breakout​ at the $104.40 ish zone?
(See Second Chart Below - Top Red Trendline - Ellipse)​

And few of us realize that in fact, Apple Shares are under performing tremendously the SPY ETF on a relative basis (ratio of AAPL vs SPY ETF - Daily Chart) since April 14 2016 when it reached the resistance trendline of a downtrend channel and broke soon thereafter the major support trendline that started back since June 28 2013! ​(See Third Chart Below - Red TrendLine - Ellipse) At the .472 level in pre-open, the ratio is still far from the 200 DMA (Day Moving Average at .509. (See Third Chart Below - Green Line)

So Apple Earnings were finally very Good News but Bulls still face a challenge for a Real Weekly Breakout above the $104.40 ish zone... 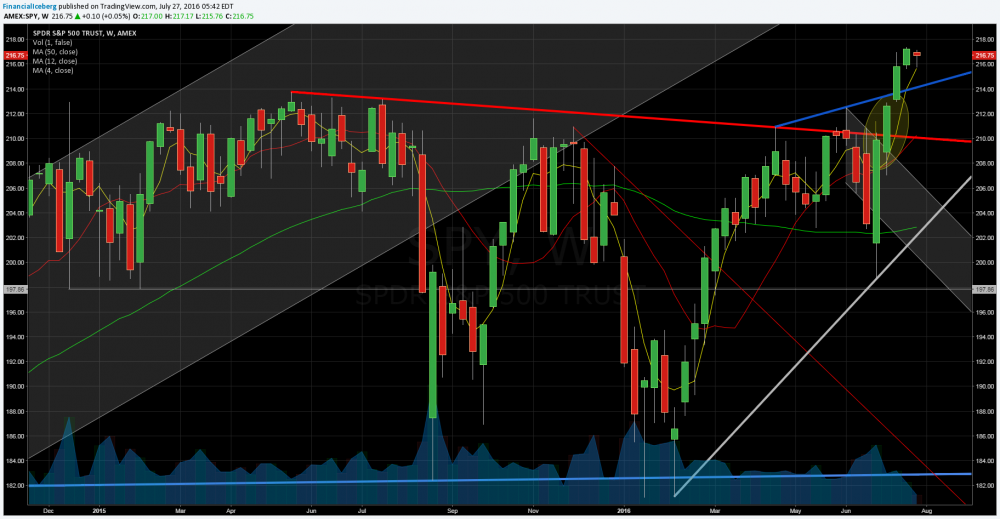