Disclaimer
​
TECHNICALS
SPY ETF Technicals: The Ultimate Battle for Bulls?
​April 20 2016 ( From Tradeview, Stockcharts )
If you would like to receive our free daily markets updates, please Sign-up
​​​​The Situation
​
​We have been in one of the most Bullish Stock Market in history
​since 2009.​ The Mighty SP500 Index (SPY ETF in our case) went
​from a low in March 2009 ​of 67.10 to the high ever on May 2015 at
​213.78, so rose by a factor ​of 3.2 spurred by low interest rates and
​strong buybacks ​from US corporations.

​​And we made almost a double bottom technical pattern (January 20
​2016 and February 11 2016 to painfully climb into a Steep Uptrend
Channel on Low Volume.​ ​​(See 1rst Chart Below - Channel)

​​We are getting very close on a Daily basis of a Major Resistance Trendline that started back since the ultimate peak in price reached​ on May 20 2015. Bears need to keep SPY ETF below that Resistance Trendline.  ​
​(See 1rst Chart Below - Thick Amber Trendline - Ellipse)​.
​
​​​​​​But looking at the big picture (Monthly Candles Chart on SPY ETF) shows us the most interesting technical factor;  we are into a lower highs and lower ​lows technical ​pattern since May 2015 and now getting near the Resistance Zone on that Monthly Downward Channel... The best set up for Bulls is testing it in a strong Volume environment in the next few trading sessions. The real battle for Bulls is here...
​ (See 2nd Chart Below - Downward Channel - Ellipse) 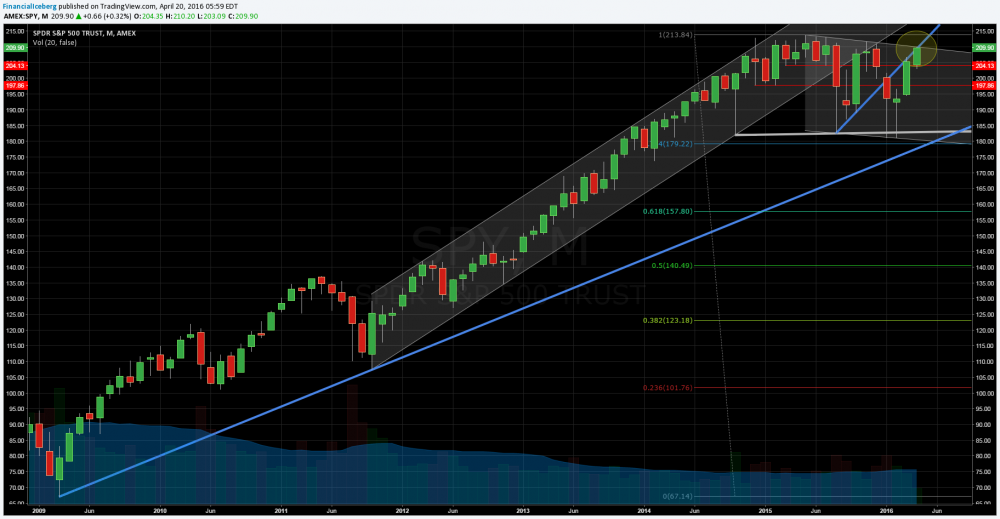