Disclaimer
​
TECHNICALS
SP500 Financials HVol: Capitulation Wave ?
February 4 ​( From Tradingview)
If you would like to receive our free daily markets updates, please Sign-Up
​​The Situation
​
​​​Rising Historical Volatility ( HVol ) on SP500 Financial Sector ( SRFI ) is most ​of
​the time ​​indicative of ​a market trend change or acceleration of previous trend.

​​HVOL did reached on December 1 2015 a low level last seen back ​in mid-August
​2015 when ​​we had a correction trade pattern in SRFI. But what is interesting, ​it is that HVol was ​getting
​higher after a test of the resistance from a downtrend channel with Financials.
​​​( See 1st chart below - Red Trendlines - Ellipses)  ​SP500 Financial Sector ( SRFI ) Peaked at 344.90 on July 23rd.

SP500 Financial Sector ( SRFI ) ​also broke on January 15 a major support trendline that started since February 2 2015 then at 292.22. On the strong correction of January 20, it did kissed and rebound from the bottom previously reached on February 3 2014. ( See Chart below, Top Panel Orange Trendline )

​​​​Historical Volatility ( HVol ) on SP500 Financial Sector ​( SRFI ) is spiking as we did see in the previous correction like in August 2015 and the second highest reading since September 2013. That major correction since December 2015 have been quite orderly, a very unusual behavior if we take into account the Volatility reached in the High Yield Corporate Bonds.

​​​​​​But the most interesting technical factor is that the ​Historical Volatility ( HVol ) on SP500 Financial Sector
​( SRFI ) is spiking at a time that we retested the previous low reached back in February 2014 on SRFI then at the 276.34 level. A tiny form of capitulation we have seen yesterday on Financials. Bulls need to protect that 276 handle zone at all costs from now on...  ( See Chart below, Top Panel - Amber Trendline ) 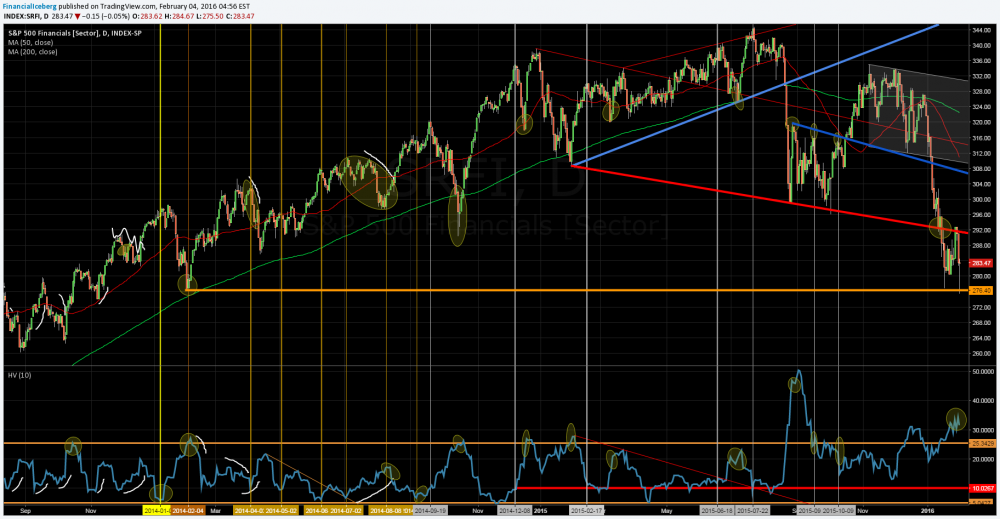