Disclaimer
​
TECHNICALS
US Treasury Bond TLT ETF: At Technical Crossroads?
​September 22 2016  ( From Tradingview,  )
If you would like to receive our free daily markets updates, please Sign-Up
The Situation
​
​​Since the beginning of the financial crisis, the Federal Reserve ​has ​
​been obliged to ​inject ​tons of liquidity into the system. ​Financial
​​assets like the US Treasury Bond ​had a very ​good ​performance ​indeed.

​​​​​​But few realize that as the TLT ETF (iShares 20+ Year Treasury Bond ETF)
​continue to defy gravity as most ​managers ​were quite ​bearish on US rates
​since the beginning of the ​year.​. As rates all over ​the world ​continue to
​tumble til a month ago, US rates remains ​one the highest quality at the ​
​highest rates ​available with still some good relative liquidity.
​
​​​​​​As TLT ETF continue to perform relatively well and hold well technically speaking (contrary of the public opinion), it got through the ​Jackson Hole Economic Policy Symposium and FED Day turmoil.

After breaking on September 8 2016 on a Daily basis within the Falling Wedge that started back since July 8 2016, date which we had the technical breakout on SPY ETF and the Ultime Peak Price on TLT ETF, we are now testing post FED the Resistance Trendline critical for Bulls to break..
(See First Chart Below - Red Trenline - Ellipse)
​​​
​​​​Looking especially at a Weekly chart on the TLT ETF ​(iShares 20+ Year Treasury ​Bond ​ETF), ​​​​we can observe that we broke on on the week of June 6 2016 a Major Resistance Trendline that started ​back ​since the week of January 26 2015​ which was the ​previous big peak in price ​at 138.50 ​o​n TLT ETF.
(See Second Chart below - Middle Thick Red Trendline)

But for me the most critical level to hold is the previous Breakout Trendline on the TLT ETF (now becomes Major Support); we did kiss last week and rebounded on it which is good technically speaking.
​(See Second Chart Below - Red Trendline)
​
​​​​​​​We will have to monitor carefully in the next few trading sessions as we complete this week sequence:
​ as we can say, TLT ETF is definitively at Technical Crossroads... 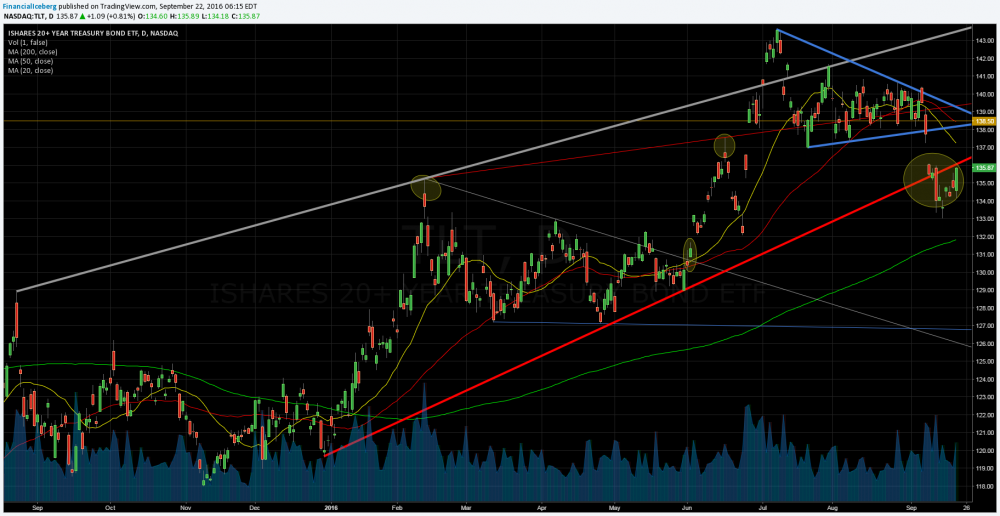