Disclaimer
​
TECHNICALS
Russell 2000 (TWOK ETF): Still Near Relative Breakout?
​April 12 2016 ( From TradingView )
If you would like to receive our free daily markets updates, please Sign-Up
​The Situation
​
The Russel 2000 Index (TWOK ETF) is at Technical Crossroads to say
​the least.

​​​So the TWOK ETF outperformed tremendously lately the Mighty SP500 Index (SP ETF) on a relative basis (ratio of TWOK over SPY). Interesting to note that this ratio reached the bottom of this cycle on February 9 2016 and now at the resistance trendline that started back since September 17 2015.
​(See first chart below - Red Trendline - Ellipse).

But the real interesting part is that as we are testing the resistance trendline on a relative basis, TWOK ETF strong slirmish to stay above the previous breakdown trendline that started back since October 15 2015. ​This is a crucial technical zone and Bulls need to protect it at all costs. (See second chart below - Amber Trendline - Ellipse ). 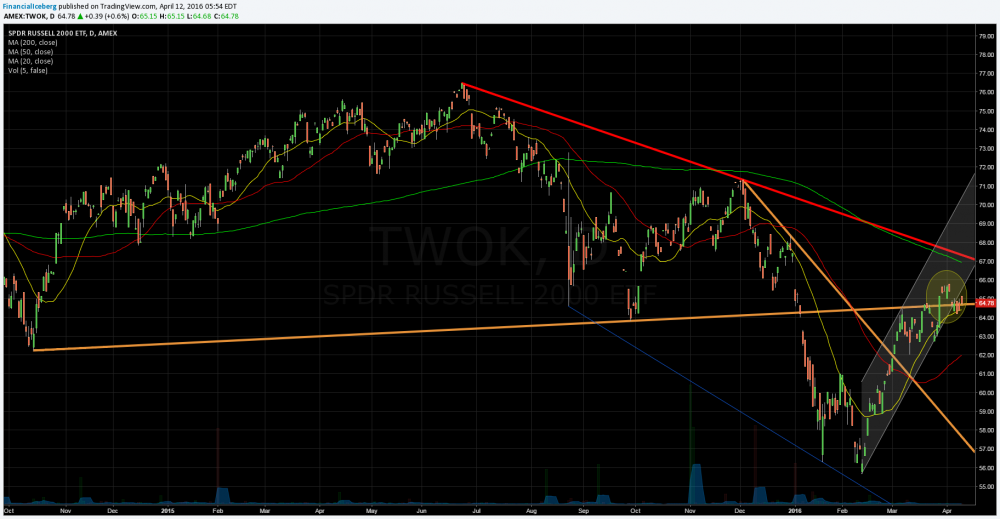