Disclaimer
​
TECHNICALS
Chinese Yuan: Another Shot Across the Bow for SP500?
August 29 2016 ​( From TradingView )
If you would like to receive our free daily markets updates, please Sign-Up
​​The Situation
​
​As most of us are concerned by the Brexit story in mid Summer and
​the Federal Reserve later on a potentialrate hike​, still a Stealth
​Devaluation is in progress on the Chinese Yuan.

So ​​in these uncertain times, it is interesting to look the behavior of
​the ​Chinese Yuan (Yuan Renminbi - candles) ​in relation to the
​Mighty SP500  (bar chart) ​on the ​first chart below.

Not surprisingly to me, the US stock market became quite sensitive
of all economic situation in China in 2015 including the exchange
rates shifts​.

Some History
​
​The first real shot across the bow was sent by the Yuan on SP500​​ that started on August 11 2015 with a series of 3 devaluations which ​represented the largest yuan depreciation for the past 20 years...

The decision by the IMF​​ to include China’s currency in its lending basket for reserve currencies did not change that much on a short term basis as the new currency basket comes into effect only starting in October 2016.
​
The second real shot across the bow was sent by the Yuan on SP500​​ that started on December 11 2015 when the People's Bank of China's mentioned on its website that it is more desirable to refer to both the bilateral RMB-USD exchange rate and exchange rate based on a basket of currencies. ​( See first chart below - Ellipses )​

We can see clearly a regime change since 2014 on the Yuan  (USDCNY exchange rate) as it broke the weekly channel that started back in August 2010. Since February 2014, we are trading within an uptrend channel (weaker Yuan against the US Dollar). Both the devaluation process of August 2015 and the Central Bank of China to shift to a basket of currencies bring a spike above the resistance of that uptrend channel.
​​( See second chart below - Top Panel - Uptrend Channel )​

We should take note that we are now on the Chinese Yuan above the previous breakout zone at 6.61 from December 2010.​​ ​​​​​(See second chart below - Top Panel - Amber Trendline)​

The panic button is on for the Chinese as economic pressure is building up quickly; US Imports of Goods from China is down 6.9% year-over-year in % in June 2016.  ​​​​​(See third chart below - Red line)​

And most importantly, the main consequence is that it keep tremendous pressure on the Import Price from China for the US which is already down 1.7% year-over-year in July 2016. (See third chart below - Blue line)​

​​As China s economic trend lately adds to the world financial markets uncertainties, I think the move of the Yuan will become a must follow as a risk changer indicator in the following months.​​ 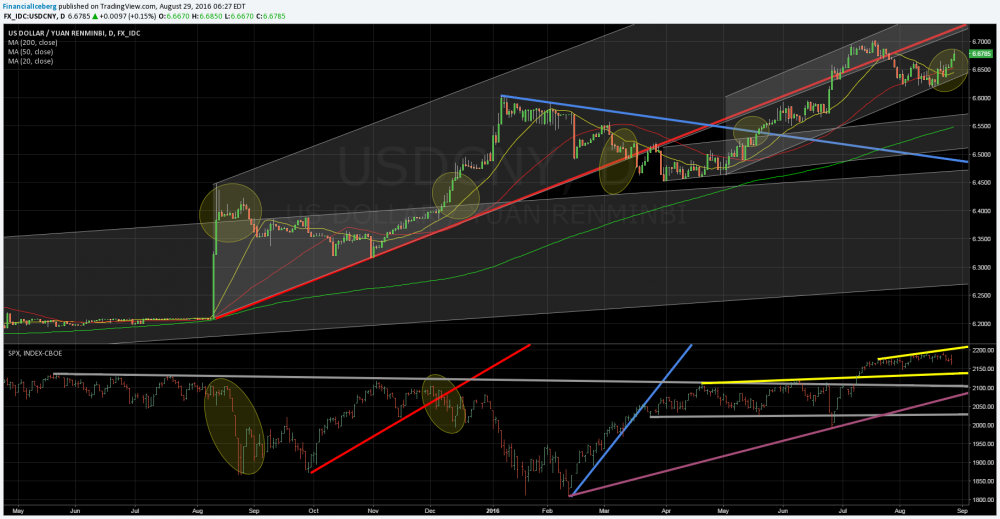