Since July 14, the XLF ETF traded in a narrow range and kept trying
to break a Major Daily Resistance Trendline that started back since
July 23 2015. (See first chart below - Red Trendline)​​

But what is interesting indeed is that the Financial Sector is only catching up to the Mighty SP500 Index, as the Nonfarm Payrolls last Friday increased the odds of a rate hike from the FED, giving some hope for banks on net interest margin.

That Breakout on XLF ETF is quite different than the others sectors who already did; no new high on Financials​​ price wise (still 6.2% below peak price reached on July 23 2015 excluding dividends) and the Breakout is only on price, not on a relative basis, making technically speaking that last move a tad weaker than the Technology Sector as an example.

I remain cautious as the XLF ETF (US Financials) is almost at the highest valuation on a relative basis compare to its International peers taking the IPF ETF as a proxy (SPDR SP International Financial Sector ETF)
which is based on the S&P Developed Ex-U.S. BMI Financials Sector Index. Also the volatility of Financials remains quite high compare to the broad market indices which does not bode well in terms of confidence.
​
​​​​Bulls must protect at all costs that Major Daily Trendline (now becomes Support) that started back since July 23 2015 (peak in price in that Bull cycle).​(See first chart below - Thick Red Trendline - Ellipse).
​​​​​​
. 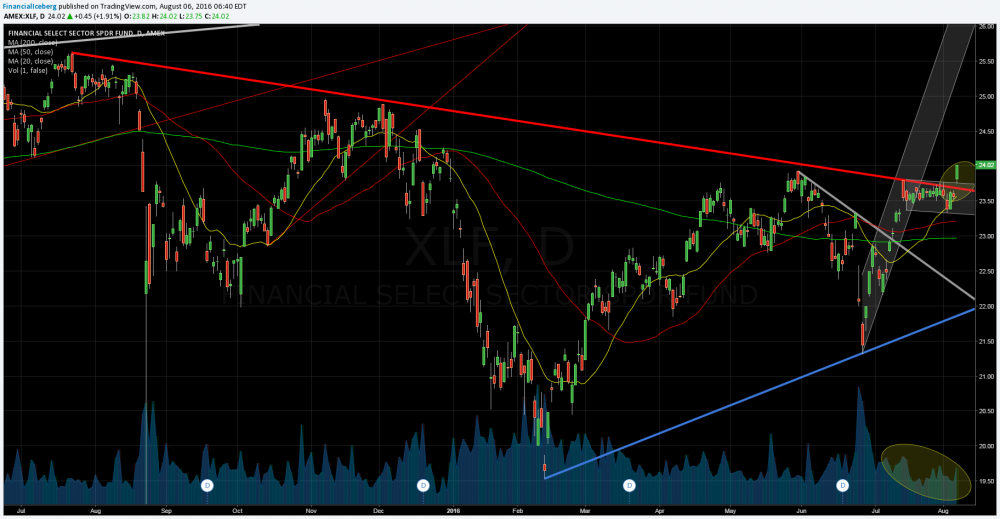