Since July 14, the XLF ETF traded in a narrow range and kept trying
to break a Daily Resistance Trendline that started back since
July 23 2016! It did finally on August 5 2016. (See first chart below)

​​​Quite surprising to have a very low Historical Volatility (10days) as we broke that Technical Level.
(See First Chart Below - Bottom Panel of the Chart - Blue Line - Red Trendline - Ellipse)​
​
​​In fact, the Financial Sector are outperforming the Mighty SP500 Index ​(Ratio of XLF ETF over SPY ETF) only since July 6 2016 after testing the Support Trendline on a Relative Basis.​
​​​​​
​​​Bulls still have a lot of work to do as we need to break the 200 DMA ​(Day Moving ​Average) on a relative basis (See second chart below - Green Line)​ and the next Major Resistance Trendline (See second chart below - Thick Red Trendline)​ to open the door for a real major breakout on the SP500 ​Financials (XLF ETF).​
We are near testing that Major Relative Breakout...​ (See second chart - Red Trendline - Ellipse)

But what is interesting indeed is that the Financial Sector is only catching up to the Mighty SP500 Index, as the economic surprise index is on the rise and then increase the odds of a rate hike from the FED, especially since Jackson Hole, giving some hope for banks on fatter forward net interest margin.

That Potential Breakout on XLF ETF is quite needed for Bulls as it represent 15.9% of the SPY ETF total allocation and is the second heaviest sector (first sector is Technology at 20.9%).

We must take note that the XLF ETF (US Financials) is almost at the highest valuation on a relative basis compare to its International peers taking the IPF ETF as a proxy (SPDR SP International Financial Sector ETF)
which is based on the S&P Developed Ex-U.S. BMI Financials Sector Index. Also the volatility of Financials remains quite low which is surprising when testing a Major Technical Level.
​
​​​​I think the broad market (SPY ETF) need the Financials to continue to perform well; as we test the Relative Resistance on XLF ETF, Bulls need to put their faith into that Potential Breakout.
​(See second chart below - Thick Red Trendline - Ellipse).
​​​​​​
. 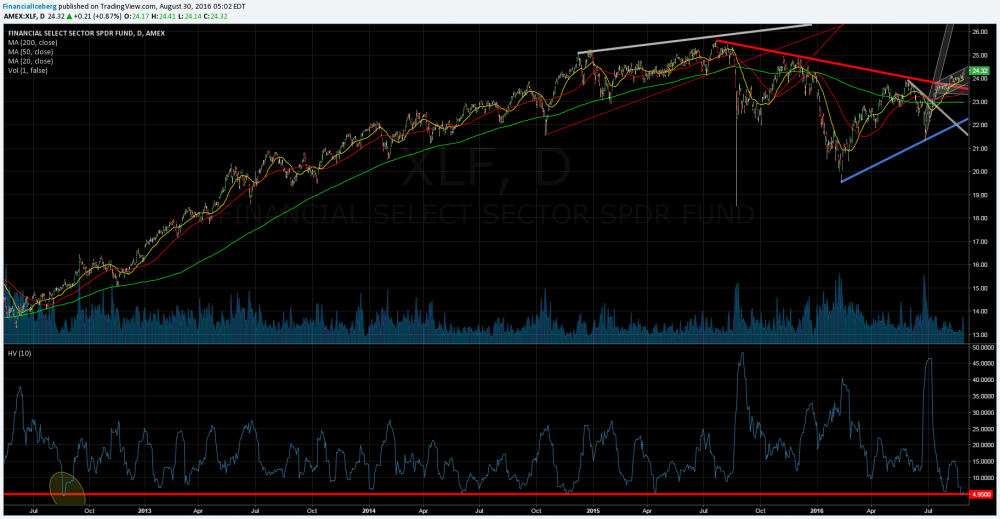